It's time to celebrate! The Queen of Pop, no other than Madonna, just announced her newest "Celebration" World Tour. With massive demand, Madonna added even more tour dates to the extensive tour as tickets sell out fast, including a stop at Capital One Arena on Saturday, 2nd of September 2023. With decades of hits up the sleeves of the young-at-heart pop icon, the "Like a Virgin" singer continues to slay and deliver wild shows as she performs her catalog of hits and fan favorites. As tickets run out fast, make sure you're part of the celebration by booking your tickets now! 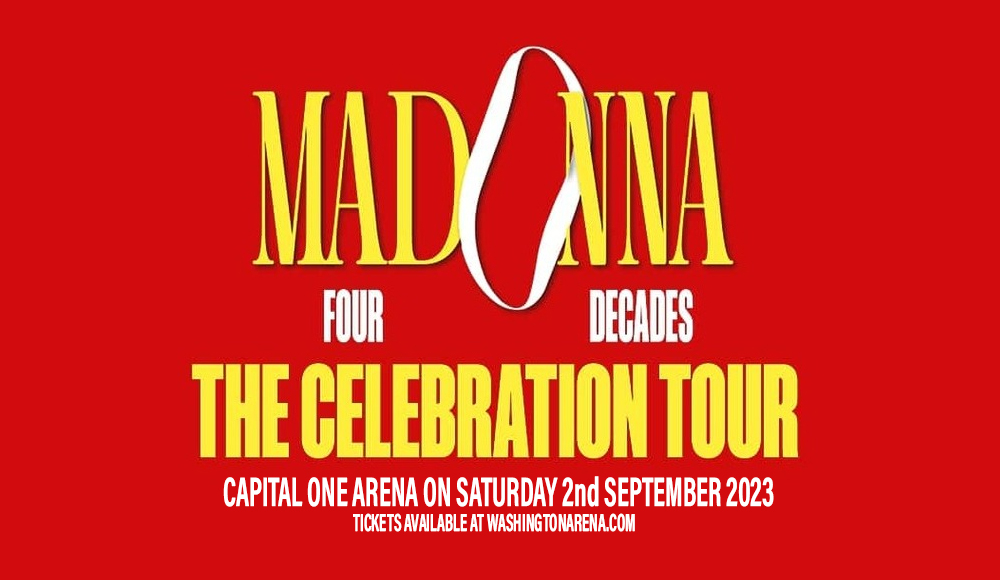 Hailed as the "Queen of Pop" for her versatility and great influence in modern pop music and visual representation, Madonna is set to celebrate four decades of reinventing and challenging the mainstream pop music scene. Dropping countless hits over the past few decades in the pop scene, Madonna amassed a massive following through LSS and party-inducing hit singles "Like a Virgin", "Ray of Light", "Frozen", "Like a Prayer", "Vogue", "Hung Up", "Celebration", and many more.

On her 12th world tour to date, Madonna at 64, continues to go all-out with her performances and new material. With over 50 shows on the roster, 2023 is the year of celebration as Madonna takes her reign as the Queen of Pop to the next level. The tour will feature special guest Bob the Drag Queen of "RuPaul's Drag Race".

"It was a huge day for Madonna and a massive success thanks to her fans," shared Arthur Fogel or Live Nation as the tour quickly sold out its tickets. In anticipation of presales for more tour dates, fans are racing to snatch their tickets for The Celebration Tour.

As the tour heavily emphasizes her greatest hits, you can expect her chart-topping and multi-platinum hit singles to surely make the set. Moreover, Madonna shows these days aren't just nostalgic live playbacks of industry-defining tracks, they're still daring, unpredictable, and as sexy as ever. You can expect peak-fashion costumes, sexy dance numbers as men flex their abs, and other daring features that make a Madonna show the greatest it could be.

As a revolutionary performer and pop star icon, Madonna placed female power at the forefront of her success. The Times noted that she "started a revolution amongst women in music … Her attitudes and opinions on sex, nudity, style, and sexuality forced the public to sit up and take notice,". With songs and performances that ooze empowerment, confidence, and passion, Madonna perfected what it means to be an influential icon amidst big waves of the music industry.

Beyond her big tour announcement, Madonna was also featured on the cover of three editions of Vanity Fair. "I’m about to create another show, and I’ve been working for several years on the screenplay about my life," she shared in an interview. "This is a good time for me — I’m gathering ideas, getting inspired, hanging out with creative people, watching films, seeing art, listening to music,".

In the interview, Madonna also talks about topics that she takes importance in – feminism, sexuality, religion, and diversity as she shares her stands against patriarchy and her efforts in these discussions. As fearless as she is, Madonna is ready to take over the global stage once again at The Celebration Tour.

So, makes sure to snatch those seats before they run out by booking your tickets now!