Stadium rock icons U2 come to Verizon Center on Sunday 17th June 2018! The legendary Irish band are embarking on the US leg of their eXPERIENCE + iNNOCENCE Tour, promoting the release of their hotly anticipated new album Songs of Experience! Expect mind-blowing anthems from one of the world's biggest bands! 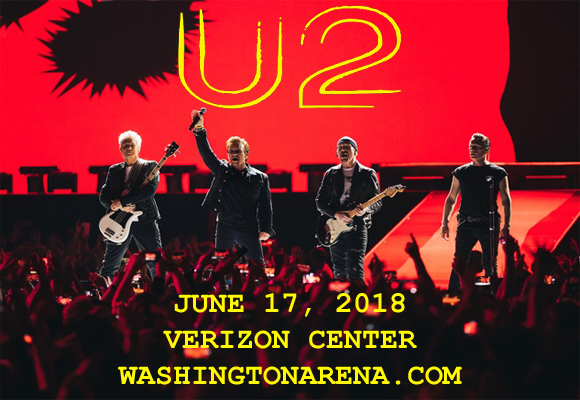 Irish rock band U2 formed in Dublin in 1976. Consisting of Bono (lead vocals and rhythm guitar), the Edge (lead guitar, keyboards, and backing vocals), Adam Clayton (bass guitar), and Larry Mullen Jr. (drums and percussion), the band began as a post-punk group and their style has evolved over the years to a stadium-rock sound. Their debut album, Boy, was released in 1980, and their first number one album, War, came in 1983. Two years after their appearance at the 1985 benefit concert Live Aid brought them international fame, the band released their biggest critical and commercial success, Joshua Tree. To date, the band has released 13 studio albums and is one of the world's best-selling music artists in history, having sold more than 170 million records worldwide. They were inducted into the Rock and Roll Hall of Fame in 2005 (their first year of eligibility), and have won 22 Grammy Awards, more than any other band.