Exciting news, all fans of alternative RnB! At Verizon Center, preparations are taking place for The Weeknd on Thursday 18th May 2017! Get ready for a live experience like nothing you’ve ever seen before – tickets are flying so don’t delay in getting yours!! Book NOW to avoid disappointment!! 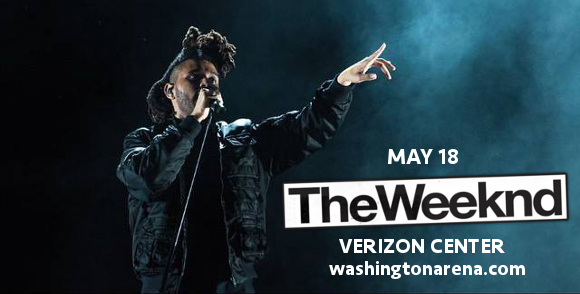 The stage name of Abel Makkonen Tesfaye, The Weeknd began as a collaboration between Tesfaye and producer Jeremy Rose. In 2010, he began to anonymously upload songs to YouTube, and in 2011, released 3 9-track mixtapes; “House Of Balloons,” “Thursday”, and “Echoes of Silence.” The mixtapes were downloaded more than 8 million times, an incredible feat for an artist without an album to his name!!
In 2012, The Weeknd released a compilation album, “Trilogy,” comprised of the mixtapes and 3 more original songs, gathering further critical acclaim as well as widespread popularity. Then, in 2013, he released his debut album, “Kiss Land.” It was a huge success, charting in the top 5 and selling 95,000 copies in just its first week of release! His second album, “Beauty Behind The Madness,” was his first number one album. Featuring the singles "Earned It,” "The Hills,” and "Can't Feel My Face,” each of these singles stayed in the top 3 of the singles charts simultaneously, making him the first artist in history to achieve this!!

Now, The Weeknd is on tour with his latest album, 2016’s “Starboy,” already well-known for its number one lead single of the same name. Don’t miss your chance to catch the Starboy tour live – get your tickets while they last!!!