The Lumineers are headed to Capital One Arena on Friday 28th February 2020! Armed with a new line-up, a darker sound and a brand new album, the folk-rockers from Denver are ready to rock and roll, thrilling fans with brand new tracks from the long-awaited follow-up to 2014's Cleopatra, III! III follows a decade in the life of the fictional family The Sparks and marks a literary turn in the writing of the band that brought us worldwide hits like "Ho Hey"! 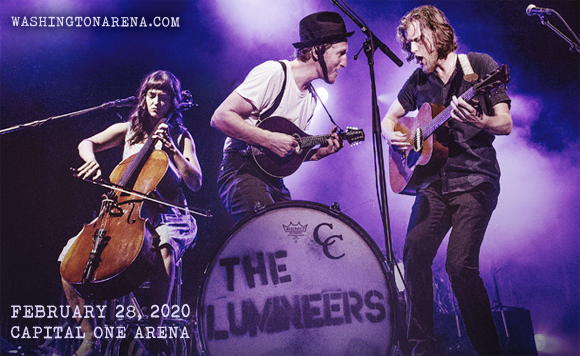 One of the most popular band of the folk-rock revival of the early-2010s, The Lumineers began as a duo, consisting of Wesley Schultz (lead vocals, guitar) and Jeremiah Fraites (drums, percussion), in New York City in 2005. Upon relocating to Denver five years later, the band was joined by cellist and vocalist Neyla Pekarek. They released their eponymous debut album in 2012, peaking at number two on the Billboard 200 and achieving multi-platinum status in the UK and Canada, helped by their globally popular hit single "Ho Hey". Their second album, Cleopatra, was released in 2014 and debuted at number one in the U.S., U.K. and Canada, reaching platinum sales in the United States. In 2018, Pekarek left the group to pursue a solo career, and the band became a duo once more, although they have four long-term touring members who join them on the road. III, The Lumineers third studio album, is slated for release in 2019.