With a shiny new #1 record up her sleeve, American singer Sza just announced her 2023 'SOS' North American Arena tour in support of her new album. The tour will be joined by rising star Omar Apollo. As the queen sets foot on tour this coming February, her first extensive arena tour will take a stop at Capital One Arena on Monday, 27th of February 2023. Coming from a 5-year wait from her multi-platinum debut album "Ctrl", Sza's "SOS" is an R&B masterpiece, featuring its hit singles "Shirt" and "Nobody Gets Me". As Sza celebrates her first #1 record, don't miss out on the SOS North American tour by booking your tickets now! 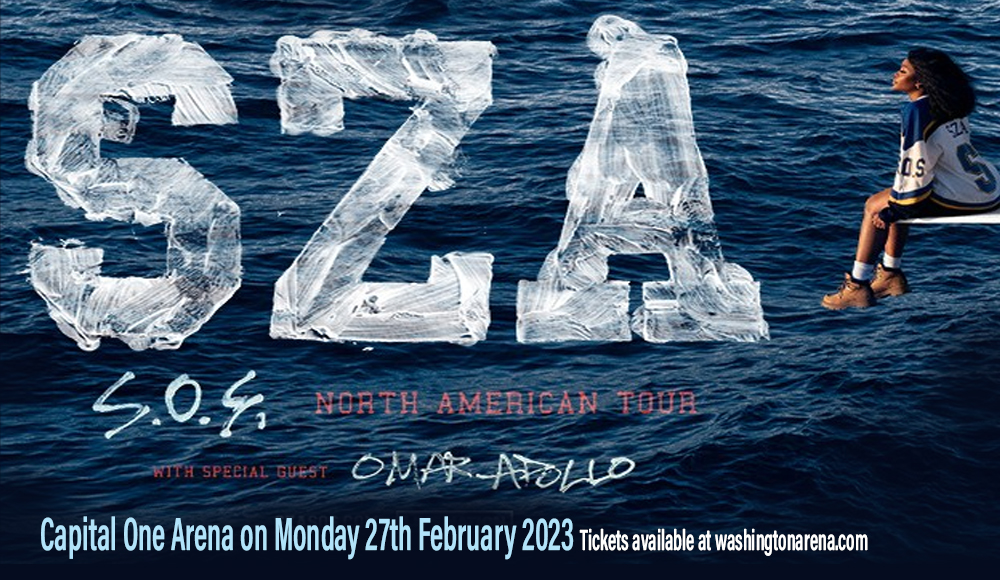 Making rounds on the global stage for her highly acclaimed debut studio album "Ctrl" in 2017, the American superstar just released her sophomore record "SOS", hitting #1 on the Billboard 200. As her follow-up record 5 years after the release of "Ctrl", Sza "never thought in a million years that people would like it," she shared in a Rolling Stone article. "SOS" hit #1 on the Billboard 200 featuring its hit singles "Shirt" and "Nobody Gets Me". As sonic R&B masterpieces continue to make waves around the globe, Sza just announced her first-ever North American arena tour. The tour will be supported by American rising R&B icon Omar Apollo.

"Time to take this shit on the road!" Sza shared on social media as fans started raving about her new album and arena tour.

Though finding her breakthrough in 2017 with "Ctrl", Sza has been in the industry since 2011 as she released a couple of EPs up until 2014. Her early releases were met with positive reviews. While working on her debut album, she also began writing songs for other artists including the likes of Beyonce and Rihanna. In 2017, the singer released "Drew Barrymore", the lead single off of her upcoming debut album. She was then signed by RCA and released "Ctrl" on June 9th of 2017. The record was met with universal acclaim, debuting at #3 on the Billboard 200. It featured multi-platinum hit singles "Love Galore" featuring Travis Scott, "The Weekend", "Broken Clocks", and "Garden (Say It Like Dat)". Ctrl was named Time's best album of 2017.

She also starred in various collaborations and features including "What Lovers Do" with Maroon 5, "Homemade Dynamite (Remix)" with Lorde, "Just Us" with DJ Khaled, and "Kiss Me More" with Doja Cat. All of these singles bagged platinum and multi-platinum certifications from the RIAA.

Fresh from the raved release of her second LP "SOS", Sza was taken by surprise as the album hit #1 on the charts, expressing that she was unsure if her fans would like her new music, five years after her breakthrough with Ctrl. Variety, in a review, notes that "'SOS' isn’t simply a statement piece: It’s practically a new bible of abstract contemporary soul,” praising SZA’s ability to make “danger, sex and joy so daringly breezy and buoyant,"

Pitchfork summarizes their take on her new record as "SZA’s long, ambitious, luxurious new album solidifies her position as a generational talent, an artist who translates her innermost feelings into indelible moments."

As Sza celebrates a big new era for the year to come, make sure you got your spots reserved at the 'SOS' North American tour by booking your tickets now!