Chilis fans listen up – it's that time you've all been waiting for, as the Red Hot Chili Peppers storm the stage at Verizon Center! Here's your chance to catch it all live, just grab a ticket and come down on Wednesday 12th April 2017! 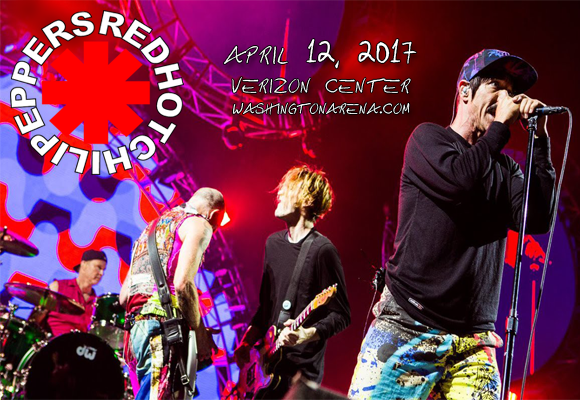 The Red Hot Chili Peppers is an American funk-rock band that currently consists of Anthony Kiedis (vocals) and Flea (bass), longtime drummer Chad Smith; and guitarist Josh Klinghoffer, who joined in late-2009, replacing longtime guitarist John Frusciante. The band released their self-titled debut LP in 1984, but their 1991 album Blood, Sugar, Sex, Magick, brought them wider success, charting the singles “Give It Away,” “Under the Bridge”, “Breaking the Girl” and “Suck My Kiss.” Since then, the group has become one of the best-selling bands of all time, with over 80 million records sold worldwide, and they were inducted into the Rock and Roll Hall of Fame in 2012. To date, the band has earned 16 Grammy Award nominations and 6 wins, as well as holding records for most number one singles (13), most cumulative weeks at number one (85) and most top-ten songs (25) on the Billboard Alternative Songs chart. Their eleventh studio album, The Getaway, was released on June 17, 2016.