Smooth-voiced R&B superstar R. Kelly is back, and he heads to Verizon Center on Sunday 13th November 2016 as part of the Buffet Tour – his brand new show! The three-time Grammy Award-winner is pulling out ALL the stops for this show:

“I’m extremely excited to head back on tour and see all of my amazing fans,” said R. Kelly. “‘The Buffet Tour’ is one you don’t want to miss, I’ve changed everything for this tour including the stage setup. Plus the production is crazy!” 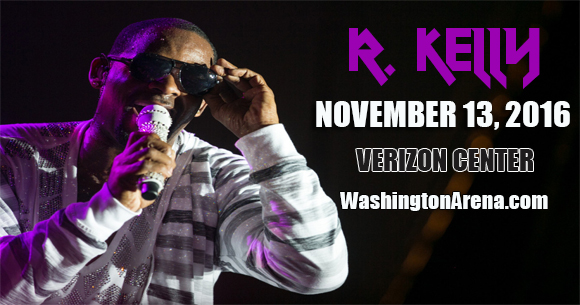 American singer, actor and former professional basketball player R Kelly began his music career in the late 1980s, and in 1992 he released Born into the 90's (credited as R. Kelly and Public Announcement). His debut solo album, 12 Play, was released one year later and lead to his first number one single, "Bump N' Grind", which spent a record-breaking 12 weeks at number one on the Billboard Hot R&B Singles chart. He is best known for his hit singles "Your Body's Callin'", "I Believe I Can Fly", "Gotham City", "Ignition (Remix)", "If I Could Turn Back the Hands of Time", "The World's Greatest", "I'm a Flirt (Remix)", and the hip-hopera "Trapped in the Closet". With over forty million albums sold, R Kelly is one of the best-selling music artists in the United States. He is a highly-awarded artist, earning a Guinness World Record, and countless others, including Grammy, BET, Soul Train, Billboard, NAACP and American Music Awards.