Post Malone is the name on everybody's lips right now as one of the most exciting fresh new artists right now! The American rapper is taking the world by storm and becoming a firm name on the Hiphop scene! With his chart topping singles, he is well on his way to becoming one of the biggest stars in modern mainstream music! Come and catch him live as he takes to the Capital One Arena stage on Thursday 27th February 2020!! See what all the hype is about all for yourself and experience Post Malone in concert! 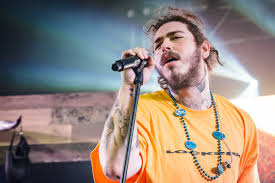 Hailing from LA, this exciting rapper has been giving the world a truly exciting time as he has quickly become one of the most talked about, must-listen to artists of 2019-2020. Post Malone has transformed his career from the underground to the mainstream, pretty much over night with a groundbreaking 90 minion records sold and hitting the number 10 charts countless of times with catchy, attention grabbing tracks from the last few years.

With his singer/songwriter and record producer achievements behind him, Post Malone paved his way to the top with his 2015 debut single "White Iverson" and has stayed at the top of his game ever since. And with the success of his first single, he was able to sign his first record deal with Republic, giving him the platform he needed to keep on showcasing his material. As his 2016 album took to the top of the Billboard 200 charts, it became a must-listen to for avid hiphop fans and has had immense sales since, with a later being accredited a triple-platinum release!

After his initial breakthrough, Post Malone has also brought to the world his 2018 album, Beerbongs and Bentleys which also took to the charts, this time hitting the number one spot on the Billboard 200 and breaking online streaming records! The major success that Post Malone has received has been incredible, including four nominations at the Grammy Awards!

Come and catch him live and see for yourself just how talented this fresh new artist really is! Post Malone is guaranteed to blow you away this coming February!