Fans of old-school boy bands rejoice!! New Kids On The Block are BACK with their Total Package tour featuring Paula Abdul & Boyz II Men!!! The massive tour, hitting 40 North American cities will see the three acts land at the Verizon Center on Sunday 25th June 2017! What are you waiting for??? Grab yourself a ticket today and catch these amazing acts live while you still can!! 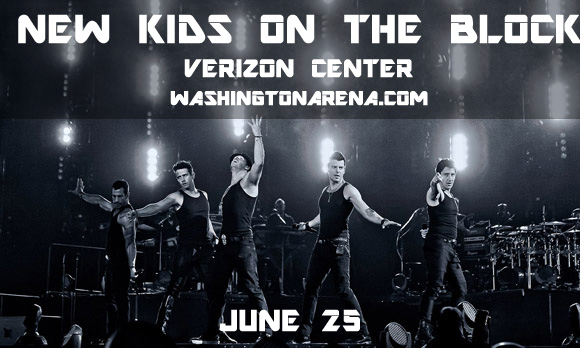 Currently consisting of Joey McIntyre, Donnie Wahlberg,  Danny Wood and brothers Jonathan and Jordan Knight, the boy band saw their greatest success in the late 1980s and 1990s. To date, they have seen sales of more than 80 million records worldwide. In 1990, they won two American Music Awards, one for Favorite Pop/Rock Album, and one for Favorite Pop/Rock Band, Duo or Group. In October 2014, the band received a star on the Hollywood Walk of Fame.

Making yet another a spectacular comeback after their secret reunion in 2007, New Kids On The Block have released a catchy new single, “One More Night” with an accompanying video, performed for the first time on “The Late Late Show with James Cordon” just in time to get fans excited for the upcoming tour!! The song is from their brand new upcoming (and first!) EP, “Thankful,” set for release later this spring, also featuring the songs “Hard (Not Luvin U),” “Still Sounds Good,” and “Heartbeat”.

Listen to the brand new single from New Kids On The Block below – but don't wait long to get your tickets, as we expect them to sell out FAST!!