Are you ready for one of the biggest concerts of the year??? That’s right, legendary pop star Katy Perry is coming LIVE to the Verizon Center on Monday 25th September 2017!! Grab your tickets now, cos’ they won’t last long – hit the “Buy Tickets,” button above!! 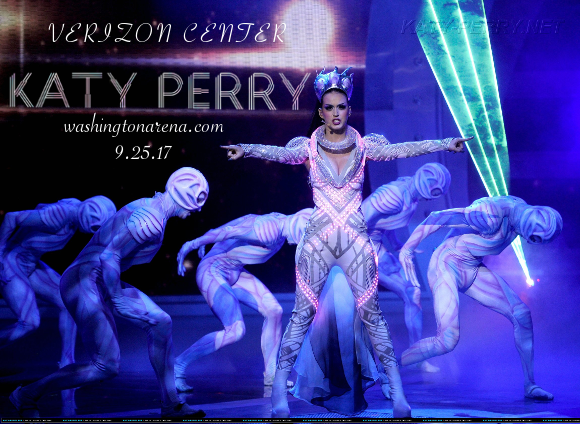 Katheryn Elizabeth Hudson, known by stage name Katy Perry, is one of the most successful artists in the world. Raised singing in church, she started out as a gospel artist, releasing her debut Christian pop album, “Katy Hudson,” in 2001, to mixed reviews from critics. After moving to Los Angeles and creating the stage name Katy Perry, she released her second album, a pop rock effort entitled “One Of The Boys”. She found huge popularity in 2008 with the controversial single “I Kissed A Girl,” which topped the Billboard Hot 100 chart for a whopping seven weeks in succession, becoming the 1,000th number-one song of the rock era.

Her third album, “Teenage Dream,” blasted her to even greater heights, winning her a Guinness World Record for being the first female artist in the world to achieve five number one hits from the same album on the Billboard Hot 100. (In fact, the only other person, regardless of gender, to have accomplished this before her was Michael Jackson with his album “Bad” in 1987!!)

Katy Perry is now on tour with her BRAND NEW upcoming album, “Witness!” Listen to the first single below, and be speedy about grabbing those tickets! It’s going to be an incredible show!!