'Don't stop believin' cause better days are surely coming! Though the past year or two may have been like 'livin in a lonely world, fret not as Journey, the legendary rock band behind classic hits such as "Open Arms", "Faithfully", and "Don't Stop Believin'", is bringing the stage at Capital One Arena to life on Monday, 9th of May 2022 for the bands' "Freedom Tour 2022". They're also bringing along a special guest, Toto, the global sensation behind the crowd-favorite anthems "Africa" and "Rossana". You're surely in for an electrifying night of energy as the crowd surely chants to both bands' timeless radio hits. A night that serves as a toast to better days await. 'Don't stop believin'! With open arms, Journey is in it to bring back legendary rock hits to the stage. Book your tickets now! 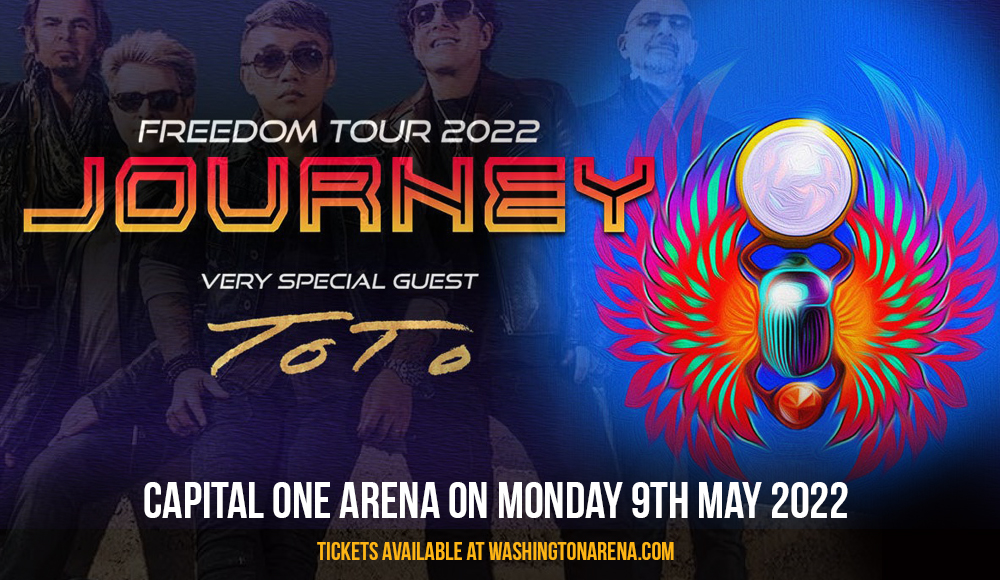 After ten years since the band's 2011 record "Eclipse", Journey finally dropped a new single entitled "The Way We Used To Be" back in June of 2021 whilst also hinting at the possibility of an upcoming album. Through decades, Journey literally embarked on a journey of making it to the mainstream music scene, band members who come and go and establishing themselves as timeless rock legends whose music struck fans around the globe.

The band has its beginnings tracing back to 1973, and propelled to fame and success by 1978 as they dropped their multi-platinum album "Infinity" with Steve Perry joining them as their lead vocalist. As the 80s came, Journey came flying high with their hits "Who's Crying Now", "Open Arms", and the US 5x Platinum single "Don't Stop Believin'" from their album "Escape". They continued to drop hits after hits such as "Separate Ways (Worlds Apart)", "Faithfully", "When You Love a Woman", and many more. In 2005, the band was marked with a star on the Hollywood Walk of Fame. By 2009, "Don't Stop Believin'" was renowned as iTunes' top-selling song released before the 2000s.

Following 2008's "Revelation" and 2011's "Eclipse" studio records, Journey's single after a decade marks a new era for the timeless legendary rock band. As Journey dropped "The Way We Used to Be", fans may be able to cling to hope of an upcoming album. There's no stopping Journey. They're coming back to the way they used to be, bringing live rock hits and anthems back to the stage. So, book your tickets now!