Jenny from the Block is taking it up a notch… This summer, the incomparable Jennifer Lopez comes to Capital One Arena on Wednesday 17th July 2019 on her It’s My Party: The Live Celebration Tour! The global pop sensation, whose “All I Have” Las Vegas residency grossed more than $100 million during its three-year run, will be bringing a jaw-dropping show to the stage, chock full of hits, in honor of her 50th birthday! Get ready to sing, dance and shake that booty as the incredible JLo gets the party started! 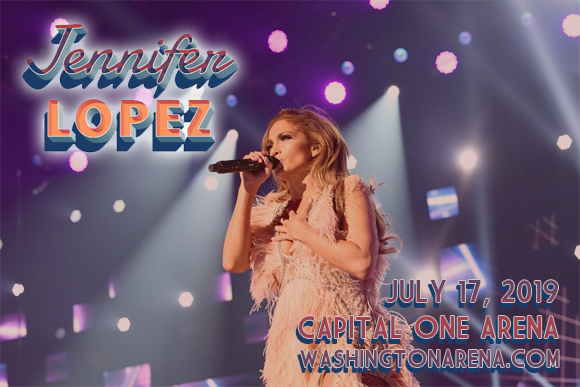 American singer, actress, dancer and producer Jennifer Lopez has sold more than 80 million records worldwide to date, including 40 million albums, and has starred in several films that have grossed a cumulative total of US$2.9 billion. Beginning her career as a Fly Girl on Fox's sketch comedy television series In Living Color in the early-1990s, Lopez went on to pursue an acting career, finding her big break in 1997 when she starred as Selena Quintanilla-Pérez in the 1997 biopic Selena, for which she received a Golden Globe nomination and became the first Latin actress to earn over US$1 million for a film. After several more high-profile acting roles throughout the late 1990s – Anaconda (1997), Out of Sight (1998), Antz (1998) – Lopez turned her hand to music, releasing her debut album, On the 6, in 1999. The album was certified triple-platinum by the RIAA and launched the number-one single "If You Had My Love," as well as the top ten single "Waiting for Tonight". Two years, later, Lopez became the first woman to have a number one album and film in the same week with the simultaneous release of her second studio album J.Lo and her romantic comedy The Wedding Planner. Her career in both music and acting has only continued to grow in success and popularity – her 2011 hit "On the Floor" ft Pitbull is ranked as one of the best-selling singles of all time, in 2012, Forbes ranked Lopez as the most powerful celebrity in the world, as well as the 38th most powerful woman in the world, and in 2018, Time listed her among the 100 most influential people in the world.