Proving to one and all that he truly is The Greatest Showman, internationally renowned film and Broadway superstar Hugh Jackman comes to Capital One Arena on Monday 1st July 2019 with The Man. The Music. The Show.! A unique experience, this one-man global arena tour sees the endlessly talented entertainer performing a host of fan-favorite songs, as well as a few choice anecdotes from his illustrious career, plus a few surprises:

“I really want to do some original music for this show,” the actor tells Rolling Stone. “I’m hoping to have written something that I can perform. I really want to write with Justin [Paul] and Benj [Pasek], who did The Greatest Showman and Dear Evan Hanson the musical — I love Dear Evan Hanson and I would love to do a song from that as well — and I’m literally doing all those workshops now, deciding what all the material is going to be.” 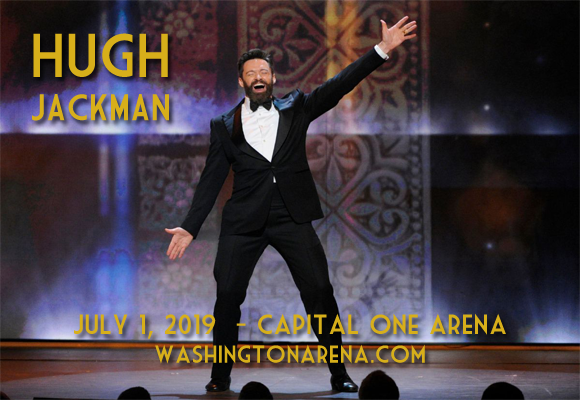 One of the world's most famous film stars, Hugh Jackman is a Tony, Emmy and Golden Globe Award-winning and Academy Award-nominated Australian actor, singer, and producer. Best known for his role as Wolverine in the X-Men films, Jackman's career began in 1994 with a role in the 10-part Australian ABC TV series Correlli. After Correlli, he began performing on the Melbourne stage and in 1998, he was introduced to an international audience when he was cast in Royal National Theatre's acclaimed stage production of Oklahoma! in London's West End, playing the leading role of Curly. In 2000, Jackman had his Hollywood breakthrough playing Wolverine in Bryan Singer's X-Men. This opened up a variety of notable film roles for Jackman, including: Kate & Leopold (2001), Van Helsing (2004), The Prestige (2006), The Fountain (2006), Australia(2008), Les Misérables (2012), Prisoners (2013), and The Greatest Showman (2017). Jackman continued to perform on stage and his performance in the Broadway show The Boy from Oz won him a Tony Award in 2004.