Are you ready for the show of a lifetime!? Then prepare yourself, for none other than Guns N' Roses are back with a vengeance on their 2017 US tour – hitting the Verizon Center on Thursday 19th October! Opportunities like this don’t come around every day – tickets expected to sell out VERY fast! Don’t delay – book now! Hit the Buy Tickets button and grab yours while they last!! 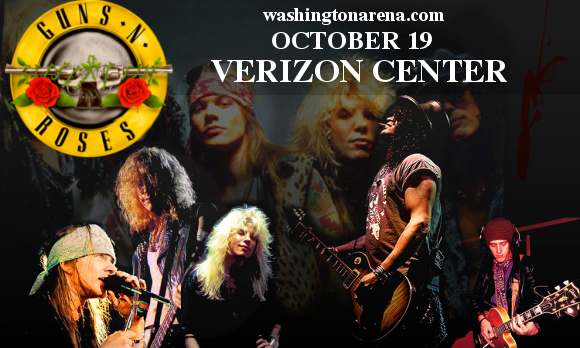 All true Gn’R fans were already celebrating on July 21, 2017 – a date marking the 30th anniversary of the legendary band’s iconic first album, “Appetite for Destruction”. But fans were given much, much more to celebrate as on this day Guns N’ Roses expanded their 2017 North American tour, adding 11 new tour dates including a stop at the Verizon Center on October 19th!

Get ready for the “Not In This Lifetime…” tour – it’s going to be EPIC!!