Lovers of Latin pop and rap, get ready for Enrique Iglesias and Pitbull on their massive co-headlining tour!! Playing a total of 1 cities, with support from the amazing CNCO, the two legendary pop stars will arrive at the Verizon Center on Tuesday 3rd October 2017!! Don't miss them – get your tickets early to avoid disappointment!! 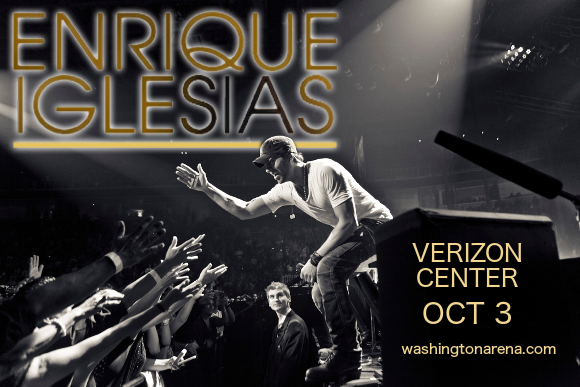 Back by popular demand, Enrique Iglesias and Pitbull last toured together in 2014, on a North American trip which was in fact extended into 2015!! With more than 150 million albums sold across the world, 10 studio album records plus two greatest hits compilation albums, Enrique Iglesias is easily the top Latin recording artist in popular music history. With number 1 hits across all the billboard charts, and a total of 27 on the Latin Songs Chart, he has hit the number one spot a total of 105 times!! His track “Duele El Corazon” gave him an unbelievable edge over Michael Jackson for most number one hits in Billboard history.

Pitbull's success is similarly massive – with over 70 million single sales, 6 million album sales, and 9 million views on YouTube and Vevo, he has achieved global superstardom. His track “Timber,” from the “Meltdown” EP hit number one in over 20 nations including the US and UK, and his collaborative song “We Are One (Ole Ola)” with Jennifer Lopez and Claudia Leitte was made the official 2014 FIFA World Cup theme.

Don't miss your chance to catch all this live – get your tickets to see Pitbull and Enrique Inglesias TODAY!!