If you're a hip hop fan, you'll know about the tour of the summer… The Aubrey and the Three Amigos Tour brings "Hotline Bling" superstar Drake and "Versace" trio Migos to Verizon Center on Thursday 13th September 2018 for a co-headlining show like no other! The "Walk It, Talk It" collaborators have been cooking up a full-power hit-fest, so get your tickets now for this "hand-picked dream team"! 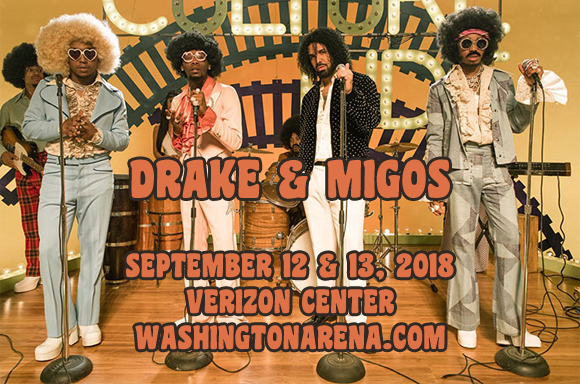 Drake is record-breaking hip hop artist, who first began his career as an actor on the teen drama television series Degrassi: The Next Generation in the early 2000s. He released his debut studio album, Thank Me Later, in 2010, debuting at number one on the US Billboard 200 and soon receiving platinum certification from the Recording Industry Association of America (RIAA). With 154 charted songs, Drake is the most-charted solo artist in the history of the Billboard 200. He has also had the most simultaneously charted Hot 100 songs in a single week (24), the most time on the Hot 100 (431 weeks) and the most Hot 100 debuts in a week (21). Drake has also been nominated for 27 Grammy Awards throughout his career, winning three. His fifth studio album, Scorpion, is due for release in 2018.