The pint-sized pop princess with one hell of a voice, Ariana Grande, will be hitting the stage at Verizon Center on Monday 27th February 2017 as part of her Dangerous Woman Tour! The singer will be performing from her latest album, thrilling fans with hits such as "Dangerous Woman," "Let Me Love You," and "Into You!" Will she be joined by boyfriend and collaborator Mac Miller…? We shall see! 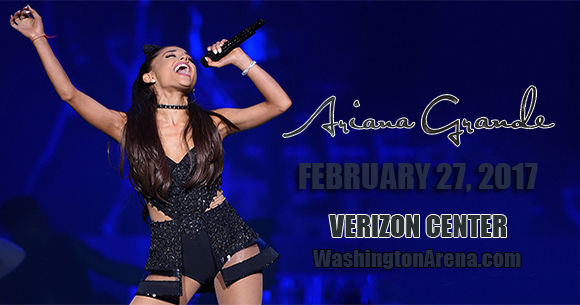 Ariana Grande is an American singer and actor, whose career began when she was cast in the Broadway musical 13, but it was landing the role of Cat Valentine on the Nickelodeon television series Victorious in 2009 that brought her to public attention. After four seasons on the show, it ended in 2013, and Grande went on to star in the spinoff, Sam & Cat, which ended in 2014. Her music career started in 2011 when she appeared on the 2011 soundtrack Music From Victorious. Grande signed a recording contract with Republic Records and released her debut studio album, Yours Truly in 2013, which debuted at No. 1 on the US Billboard 200. My Everything (2014), Grande's second album, debuted at No. 1 in the US and charted well in various other countries, with the singles "Problem", "Break Free", "Bang Bang" and "Love Me Harder" from that album leading her to have 34 continuous weeks in the top 10 of the Billboard Hot 100 and the most top 10 singles of any artist in 2014. In 2016, she released her third studio album, Dangerous Woman, with the title track debuting at No. 10 on the Billboard Hot 100, making Grande the first person in the history of the chart to have the lead single from each of her first three albums debut in the top 10. Grande has two American Music Awards, the Music Business Association's Breakthrough Artist of the Year, an MTV Video Music Award, two MTV Europe Music Awards and two Grammy Award nominations.