You heard right – after dropping extensive hints, Ariana Grande has confirmed her 2019 tour, in support of her latest hit album, “Sweetener”! She’s bringing her massive stage show to the Capital One Arena Monday 25th March 2019 – prepare for amazing choreography, sets, lighting and pyrotechnics in addition to the voice of the superstar herself!! Tickets on sale now and expected to disappear FAST – so don’t delay! Grab yours while you can!! 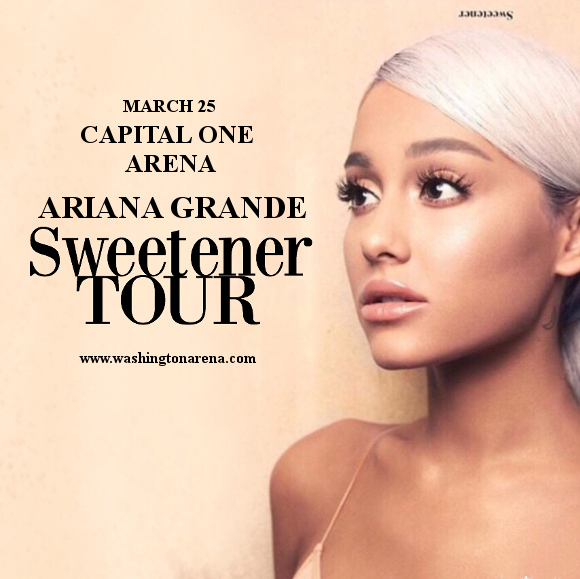 As one of the best-selling artists in the world right now, Ariana Grande’s new album, “Sweetener,” has been one of the most hotly anticipated releases of 2018. And nobody’s been disappointed. Preceded by the stunning single “No Tears Left to Cry,” the album has so far been met with rave reviews from fans and critics alike. "It's definitely more personal,” the singer said, when asked about the overall tone of the latest album. “You know, I feel like 'Dangerous Woman' was a grown-up 'My Everything,' and this is a grown-up 'Yours Truly.’"

You’ll know all the songs by now – so it’s time to get ready to sing them along with the star herself!! Well, what are you waiting for?? Grab your tickets NOW while they last!!