It's the show you've all been waiting for! In the wake of their eagerly awaited release of their new album, “Everything Now,” the sublime Arcade Fire will be going on tour – heading to Verizon Center on Saturday 16th September 2017! Don’t miss out on your chance to see the band that brought you the modern classic “Funeral” – book your tickets to see Arcade Fire LIVE in concert today!! 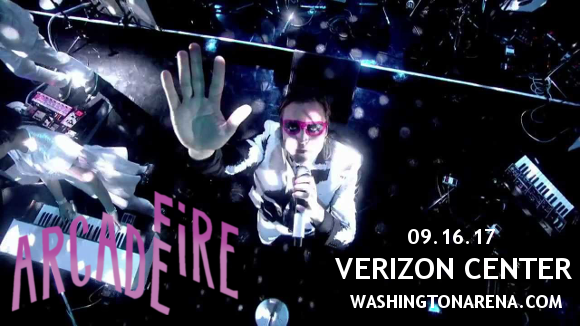 The band’s line-up have a long history together. School friends Win Butler and Josh Deu began to play music together whilst studying at McGill University and Concordia University respectively. There, they met Régine Chassagne, who joined the band despite their having no music to show her at the time (and later married Win Butler, which may have had something to do with it!) They started performing in 2001, recruiting Tim Kyle and Brendan Reed, multi-instrumentalists, Myles Broscoe on bass, and Dane Mills on guitar and drums. Over the course of the release of their self-titled EP and initial shows, multiple lineup changes took place due to friction within the band, yet their fanbase simply grew – and hankered for more!

The band released their debut album, “Funeral,” in 2004 to explosive success. It received rave reviews from critics, with Drowned In Sound describing it as ”empowering and hopeful and euphoric all at once”. The band have since then seen a series of albums that have kept the bar award-winningly high, and their latest promises to be no exception!!