Revered and beloved tenor Andrea Bocelli comes to Capital One Arena on Sunday 15th December 2019, performing from his most recent studio album, 2018's Si! The best-selling classical-crossover artist has captured hearts around the world over the past three decades with his rich and unique voice, seemlessly traversing a varity of musical genres from opera to pop, and selling over 90 million records throughout his incredible career! Don't miss your chance to see him live! 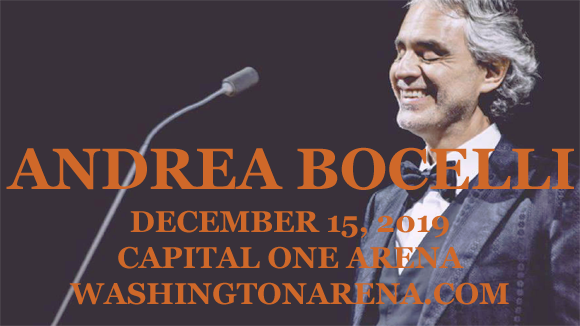 One of the world's most notable and prolific classical-crossover artists, Italian opera singer, songwriter, and record producer Andrea Bocelli made his debut in 1993 with the worldwide hit "Miserere", recorded with Italian rock star Zucchero and Luciano Pavarotti. The following year, he released his debut album, Il Mare Calmo della Sera, and to date he has recorded 15 solo studio albums of both popular and classical music, three greatest hits albums, and nine complete operas, selling over 90 million records worldwide. Throughout his career, he has been honored with several awards and accolades, including the title of Grand Officer of the Order of Merit of the Italian Republic in 2006 and a star on the Hollywood Walk of Fame on 2 March 2010 for his contribution to Live Theater.